Personal integrity and know-how are the main factors that have made Mid-State Structures, Inc., one of the largest companies of its kind in Kansas.

Said E.G. Young, who heads up the Hutchinson-based firm, “A lot of people can build farm buildings, but to get repeat business and word-of-mouth recommendations, you must build a reputation for honesty, good workmanship and a willingness to help farmers select the buildings best suited for their operations.”

A case in point on the last category concerns the standard 48 x 96-ft. steel utility building that is used for grain and farm machinery storage. Young put up nearly 70 of these structures in 1973 and might have had a dozen others except for slow deliveries and a cold, wet spring which prevented the pouring of concrete for nearly three months.

“This type of structure has proven to be the best and least costly for this area,” says Young. “It’s a standard-sized, pre-engineered Butler building. When a farmer wants to lengthen it by 10 ft. or maybe make it 6 ft. narrower, we point out that costs skyrocket because of the extra labor. If there is a need for structural changes, then we may recommend them.”

Though this building is most popular in the area, the company builds hog houses, dairy barns, utility sheds, and other types of buildings.

The main boom in utility buildings has been brought about by two factors–high cost of farm machinery and the incidence of theft and vandalism. Young says when a farmer pays $17,000 for a tractor or $25,000 for a grain combine, he makes sure they are protected.

Young has developed several operational techniques that have proven worthwhile. one is that he personally visits with each owner sometime during the erection of the building. He finds that regardless of how high in esteem the owner holds the foreman or salesman, he prefers to talk to Young. 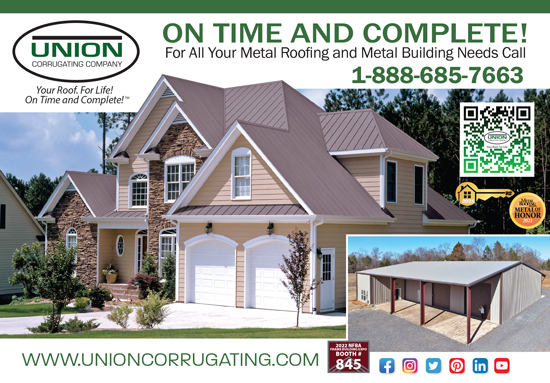 “And I make myself available,” Young said. “We have the owner sign a certificate of completion, but we both feel better when I personally okay the building and then drop back weeks or months later to see if there are any defects.”

“One of the best selling tools is a film strip which I show here in the office, at farm meetings or at farms,” Young said. “I often use the tape recorder to record useful information, then replay it. One film strip we still use is a lecture on pole type farm buildings put out by Kansas State Univ. I use their audio with pictures of our own buildings.”

Personnel have come and gone, but Young relies upon veterans to carry most of the load. One man has been with him 26 years, another 17 years, while the top salesman is a man 78 years old. There are two other salesmen, and a total of four key men on the builing crews.
Young usually carries from 20 to 40 people on the payroll.

“Our three main problems are finding good labor, slow deliveries of material, and inclement weather. Sometimes we may get 10 buildings behind schedule. One way to solve this is to sub-contract some of the building. There are two or three fellows who used to work for me who can do this work with their own crews.

“We get the contracts, furnish the materials and then check out the building when it is finished. As long as the farmers know I will be responsible, they are willing for these men to put up the buildings.”

One selling aid that gets more and more valuable is a large ledger which lists every building put up since 1947. It gives names of owners, locations, sizes of buildings, costs and other data.

“When someone says I erected a building for him several years ago, we flip through the book and find the information. He may want to enlarge it, build onto it or add some equipment. This often helps in determining what he needs.”

E.G. Young has become well-known in Midwest farm building circles. He is on Butler’s Agri-Builders Advisory Council, and a few years ago developed a new method of making concrete froms which he says saves him a full day of a 5-man crew’s labor on a standard 48 x 96-ft. building. The accompanying photos show the details. After being in this most of my life,” said Young, “I can remember there were always problems. Everything is bigger and more expensive, but basically we are still trying to do the same thing–give the farmer the kind of building he needs for a reasonable price and keep back a little profit for ourselves.” RB

Greg Fox is a concrete leader. For the last decade he has worked as a field supervisor. “I have been building bridges between the experienced men that are heading for retirement and the inexperienced. This has become my passion. I have watched the labor force completely change in my 15 years in the trade. And change is painful sometimes. I work to ease the pain.”

Innovation in the Field

Greg Fox from Hayward Concrete commented on Young’s problem
solving techniques. He believes that sometimes the people in the field can see most clearly how processes can be improved. “Innovation is one of the qualities that I admire the most from the old school. It’s necessary for us (in the industry) to remember that we can change our techniques to improve productivity. It’s easy to forget with engineers and architects constantly changing things.”

Fox has seen companies that have recognized this forming issue in recent years and have created form brackets that perform the task that Young amended. “Having a system for hanging, stripping, and having
a truck or trailer set up to move the form work from job to job
professionally and efficiently is imperative for productivity,” Fox said. “This is a great example of why we have sub contractors; they’re extremely proficient in their scope of work.”

Rural Builder was called Farm Building News in 1974. This was the fourth edition that year; we skipped the third in order to publish this article in conjunction with our concrete feature article.

For 50+ Years Rural Builder has been providing the news, trends and resources builders need. Prior to the January 1974 edition, “Farm Building News,” as it was called, was in newspaper form. However, those old papers are not to be found in our Shield Wall library. We would love to see some of them… it’s our lost heritage! If you have one/some of them please drop a line to me:

[email protected] I’ll publish a brief news story about you, your organization, and your projects in return!

This article from the July/August 1974 edition is about building a business – and making forms for concrete. Read on and enjoy a bit of construction history!

Pioneer Millworks commits 1% of all teak sales to Borneo Project